The images I chose to submit were from a series I started when I was abroad in the fall of 2008.  While I was in Europe I really began to explore my religious background and I found that while I was in the middle of the most religious places in the world that I was truly inspired.  From that inspiration I came up with a group of photographs that truly embrace the things that I saw and experienced. — Carrie Engerrand 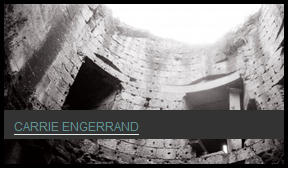 Edot Gallery is a venue designed to showcase Episcopal artists, sponsored by the Diocese of Texas.

If you'd like to submit your original, two-dimensional art for consideration in the EDOT Gallery, please send 10-12 images to Carol E. Barnwell. Include a biography, artist’s statement and brief description of the work to be considered with title, media, dimensions and date.

All work chosen for exhibit must be delivered to the gallery. EDOT Gallery requests 10% of any sales. Currently, the gallery is booked through spring, 2012. The next series of shows will be chosen in the early fall.