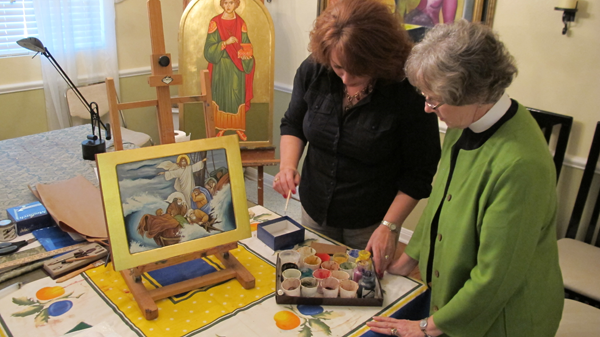 The Rev. Mary Green
Following graduation with an M.Div from the Seminary of the Southwest and ordination in 1992, Green served as Chaplain at TX A&M Canterbury, Vicar at Christ Church, Cedar Park, and retired earlier this year after seven years as staff chaplain at St. Luke's Episcopal Hospital, Houston.  She continues to serve as chaplain for the Iona School for Ministry.  Mary began studying iconography in 2004 with Vivian Karayiannis, learning the Byzantine method.  She completed one icon using the Prosopon method, a variation of Russian icon writing, under the tutelage of Kay Sevick.  With occasional help from Vivian, Mary writes icons now as her prayers in solitude, and has recently completed a book of reflections on eight of the icons she has written.

Vivian Karayiannis has a true love for her vocation. Vivian’s icons are works of fine art as well as visual aids that lead those who view and venerate the icons deeper into their own spiritual center. Born in Greece, Vivian moved to Houston in 1991 with her husband and two daughters. She studied Byzantine iconography in Greece and continued her art studies at the University of Houston. She has a diverse body of work, including oils, acrylics and watercolors.  Her primary medium is the egg tempera, one of the oldest and most versatile mediums.

Edot Gallery is a venue designed to showcase Episcopal artists, sponsored by the Diocese of Texas.

If you'd like to submit your original, two-dimensional art for consideration in the EDOT Gallery, please send 10-12 images to Carol E. Barnwell. Include a biography, artist’s statement and brief description of the work to be considered with title, media, dimensions and date.

All work chosen for exhibit must be delivered to the gallery. EDOT Gallery requests 10% of any sales. Currently, the gallery is booked through spring, 2012. The next series of shows will be chosen in the early fall.