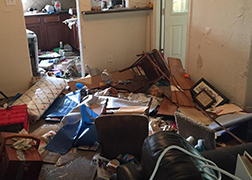 Betty Lessert rummaged through the remains of the M I Lewis Social Service Center for any salvageable items. The five feet of water from Tropical Storm Harvey had destroyed almost everything. Meat sat rotting in the food pantry’s refrigerator as she continued to wait for a promised dumpster. The United Way agency will set up temporary quarters at Holy Trinity Episcopal Church, Dickinson.

“We lost the majority of our files, our computers, our phones. We had a new van and water went up all the way to the dashboard,” said Lessert, the executive director of the center and a member of Holy Trinity Episcopal Church, Dickinson. The first floor of Lessert’s home was also flooded and a total loss.

M I Lewis, which served 21,000 people last year in the Dickinson ISD area, was facing a crisis at a time when they were the ones to whom people looked for help.

The Rev. Stacy Stringer, rector of Holy Trinity offered Lessert church classroom space, which had come through the weather event dry. “United Way Galveston County Mainland has volunteers lined up for us,” Lessert said, explaining that her case workers and food pantry coordinator were present and ready to go to work. “Our clients are some of the most vulnerable people in Dickinson, Bacliff, Santa Fe and San Leon,” she said.

The emotional damage Harvey caused to Holy Trinity parishioners is something Stringer will never forget. She said it was a gut wrenching to think of several members anxiously looking for soggy baby photos of adult sons, both of whom had passed away in the last year.

“Another lady insisted on wrapping her crystal while volunteers were cleaning out her flooded home,” Stringer said. “We have to be especially tender with people who may want something that seems nonsensical amidst the overwhelming disaster, but this was symbolic of something for her and critically important. As we help, we have to be sensitive.”

She had received a call at 4:30 a.m. from one parishioner as flood waters rose. The parishioner and her adult son were on the kitchen counters as the water rose in the dark, there were snakes swimming in the water and 911 still had not responded. As their phones lost power, Stringer took over trying to contact emergency responders. “I was terrified that they might not survive the night,” she said. They were finally rescued by the Cajun navy and taken to an overpass to wait with other evacuees to be taken to a local shelter.

Christine Harris, a recent A&M graduate and member of nearby St. John’s, La Porte, arrived like the cavalry to help Stringer at the church. “I’m here to be present at the church so Stacy can go out into the community and minister to people,” Harris said.

Stringer, who has had little sleep in the last week, was walking around the parish hall with two cell phones, both of which continued to ring. Harris hopes her presence will take some of the worry off Stringer’s shoulders.

Harris’ church in LaPorte was hit by Hurricane Ike and 60 percent of the city’s population was under water. She knows what this kind of disaster is like, but she also knows there is recovery eventually.

“We know what recovery is. We know it’s possible and it brings the community together. We’re reminded of what’s important and the things you can do to help people,” Harris says.

St. John’s parishioners also have taken loads of soggy laundry home to wash for Holy Trinity’s members. They were also delivering snacks and drinks to work crews in the community.

Stringer invited nearby Faith Lutheran Church, which suffered major flooding, to worship with Holy Trinity, and this Sunday, their pastor Deb Grant will preach to the combined congregations.

“The fact that the church is high and dry will give members of the community access to a social service agency, a food bank, a worship center—and hopefully that will allow them to leave the nightmare behind and focus on helping others,” Stringer said.

M I Lewis Social Service Center’s food bank receives its inventory from the Houston Food Bank. To donate nonperishables, visit houstonfoodbank.org or get in touch with United Way Galveston County Mainland by calling 409.948.4211.