Moving Forward in Truth: How Long, O Lord, How Long? 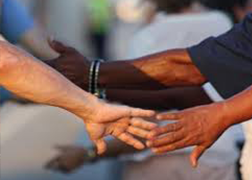 The battle we're in
Is no place we've not been.
And now, here-we-go-again,
Right's cause to defend
And wrong's work to amend.
But with God's help and yours, too, my friend,
It's a battle we all can and will win.
We must!

“Then God said, “Let us make humans in our image, according to our likeness…” Genesis 1:26

I have long said and believed that racism is the race that we as a society, as a world, continue to run that has no finish line and no victors, but an ever-mounting number of casualties.

Before moving to Houston, my family and I lived in Evansville, IN. For several years, I offered storytelling programs to Headstart children in a number of locations in and around Evansville.

One day I arrived early for story time at one of the locations, while the children were still eating lunch. I tried to be discreet, so as not to disrupt their meal, and sat at a table removed from where they were having lunch.  While sitting at the lunch table, a little boy with long blonde hair, who couldn’t have been any more than 5 or 6, stood up from his seat, looked at me and said, “My daddy don’t like Black people.” I responded with, “Okay or all right, or is that right?” and continued doing what I was doing, not trying to engage him on this. Not long after, he stood again, looked at me and said, “My daddy won’t let Black people ride my bicycle.”

At this point, one of the teachers came and whisked him away, and I began setting up for story time. When we came together in the story circle, this same little boy insisted on sitting in my lap, where he remained for the duration of our time together. Even when it was time for me to leave, he had to be coaxed away from my lap by his teacher. His experience was incongruent with the messages he had heard and been taught. Something within him sought to reconcile the differences.

I don’t remember seeing this little boy again, but from time to time, even now, I will think about him and wonder what became of him…wonder what impact his daddy’s dislike of Black people and him making it known to his son in such a way had on him…wonder what impact, if any, that Black lady coming to tell stories that day had on him. I wonder if he was able to overcome or succumbed to the evil that, left uninhibited, might have consumed his soul. I just wonder…

Words matter. The words that we speak and the ones we allow to continue being misspoken. They have the capacity to form and shape, as well as misshape and destroy, when left unrestrained.  Just like in the parable of the weeds where the farmer planted good seed in his field, but while he was sleeping an enemy came and planted weeds. When the plants came up, both wheat and weeds grew, with the potential, of course, always for the weeds to choke the life out of the wheat.

The beginning of the end of such senseless violence as occurred in Buffalo more than a week ago, as well as that occurring throughout our beloved nation, weekly, even daily, begins with each of us…with the recognition that we truly are ALL God’s children…with the resolve to carry out God’s commandment (note, this was given as a command and not an option) to “Love one another,” not only because of, but in spite of …as Christ loves us. While our externals may vary, determined so by God’s prerogative, we are ALL made “Imago Dei,” in the image of God.

The Church, the Body of Christ, with Christ as its head and with its many members, cannot stand innocently by and must not stand idly by. The words of the 16th century mystic Teresa of Avila cry out to us across the centuries reminding us, Christ has no body now but ours…No hands, no feet on earth but ours. If we, who are Christ’s own, will not love in word and deed beyond our differences, if we refuse to challenge divisive and life-threatening discourse, that are an abomination to the Creator of us all, then who will stand for Christ? “Dear children, let us not love with words or speech but with actions and in truth (1 John 3:18).”

We must actively embrace our differences, both in deed and example, in a way that we can move forward as a healthy society instead of yearning for an inglorious past and turning back the hands of time. We must teach our children, be models for them of the right thing, the right way, the Christ way. None can do it all, but each one can reach one. We must…for the Kingdom’s sake, for our own sake and for humanity’s sake.

Beauty...comes in a myriad of colors, through which God sends his grace.
And when we look deep enough within...
(beyond the covering of skin - the sweetness of the fruit is found therein)
We can see
God's face.
Help us, O God, to look long enough and deeply enough into the other to see
Your face
Your grace
In everyone
The likeness of Your Son.
Lord, in Your mercy, hear our prayer.
Amen.