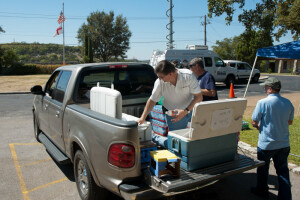 The Episcopal Diocese of Texas and individual churches have been collecting donations of goods and money for fire victims since September 5th. The communications office has been flooded with emails and newsletters calling for donations from churches across the diocese.

“We have seen an outpouring of support from our congregations for victims of the wildfires and for the responders,” said the Rt. Rev. C. Andrew Doyle, Bishop of Texas. “This generosity, set against the backdrop of very hard economic times for many people, reflects the spirit of abundance with which we are blessed, even in the face of great challenge. I am a grateful bishop and deeply moved by the response. We can all be grateful that more lives were not lost and we will stand with our brothers and sisters who have lost so much as they begin to rebuild.”

St. Alban's, Austin, announced that they raised more than $5,000, mostly in the form of gift cards for the fire victims. Good Shepherd, Tomball, which sits not too far from the Riley Road Fire, collected more than $2,300 in donations, while St. Martin's Preschool, Houston, made a generous contribution of $1,000 to EDOT fire fund.

Many congregations have been donating directly to Calvary Episcopal in Bastrop, which has 40 families who have lost their homes.

Other churches opened their doors as donation centers. The Episcopal Church of the Resurrection, Austin, was one of the first donation centers to start collecting needed items for Bastrop. St. Matthew's in Henderson, raised funds and donations for the volunteer fire fighters in East Texas who rely on their own finances to travel to and fight fires.

St. Luke's on the Lake, Austin, acted as a relief center for fire fighters and victims alike while the Steiner Ranch Fire burned just miles away. Media trucks filled the church's parking lot to report on the nearby fire and its aftermath. St. Luke's continues to raise funds for those victims as well as the victims in Bastrop.

Emmanuel and Epiphany, Houston also set up donation centers, collecting goods from other Episcopal churches and individuals in the area. Many Houston churches have sent donations and volunteers to the Bastrop and Riley Road fires in north Houston. On his visit to Bastrop September 10, Bishop Andy Doyle ran into members of Holy Apostles, Katy, who were working with victims. St. Mark's, Bay City has also delivered truckloads of goods to Bastrop.

At this point, donation centers are reportedly full of clothes and other items. People are encouraged make monetary donations or donations of gift cards as the victims of these fires seek to get back on their feet.

Or to send a check by mail, do so here:

MAKE A DONATION TO COMMUNITIES DEVASTATED BY TEXAS WILDFIRES

The first weekend in September saw a massive breakout in wildfires across Texas. This blog contains updates to the ongoing fire situation as well as links to resources and ways to help.

MAKE A DONATION TO COMMUNITIES DEVASTATED BY TEXAS WILDFIRES